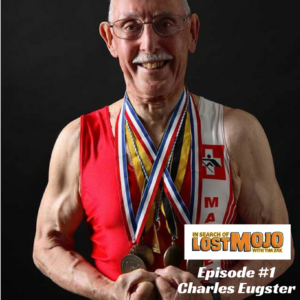 “I was a self-satisfied, balding lump of lard.”
– Dr. Charles Eugster

Dr. Charles Eugster was a world-record holding athlete, body builder, and author of Age Is Just a Number: What a 97 Year Old Record Breaker Can Teach Us About Growing Older.

He restarted competitive rowing at 63 and, in the period from 1997 to 2013, he won 40 Gold Medals at World Masters Rowing Regattas.

Charles was a dentist in private practice until the age of 75, publisher of a newsletter on clinical dentistry in 3 languages until the age of 82, and then employed at the age of 90 as Fitness Ambassador for INJOY Fitness Group (Germany). His 2012 TEDx Zurich speech has earned over 550,000 hits on YouTube, and the video of him breaking the World 200m record has to-date earned over 1 million hits.

This interview is likely one of the last that he conducted and I was honored to have spent some time with a man who possessed an indomitable will and an irrepressible energy.  I hope you enjoy this rollicking episode as much as I did!

Want to hear another episode of a charismatic masters runner? In this episode, we explore with Wally Hesseltine the preparation and determination to run in ultra-endurance events like the Western States 100 (that's miles!).