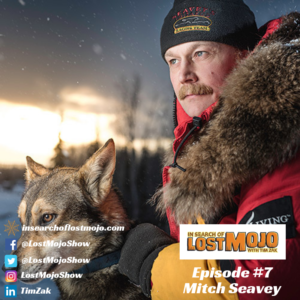 “Age, by itself, is not a reason to not succeed.”
– Mitch Seavey

Mitch Seavey is a 3-time winner of the Iditarod, a sled dog race from a ceremonial start in Anchorage to Nome, Alaska that’s been called the “Last Great Race on Earth”. Teams often run the 1000-mile race through blizzards causing whiteout conditions and confront sub-zero temperatures and winds that can cause the wind chill to reach -100 degrees.

As the son of one of the race’s original founders, Mitch and his son Dallas, a 4-time winner in his own right and the youngest winner ever, in 2015 became the first father and son duo in Iditarod history to claim the top two finishing positions of the race.

Mitch's ability to keep competing at the highest levels of his sport against competitors more than half his age through continuous innovation, curiosity, and adaptation, a deep love and admiration for his dogs, and the enthusiasm and determination to not easily give in to Father Time is an inspiration.  Enjoy!

Want to hear another episode from world-class masters endurance athlete?  Check out this episode with the inspiring Wally Hesseltine, a 70+ year-old ultra-marathon runner who talks about the importance of consistency, grit, and simplicity.